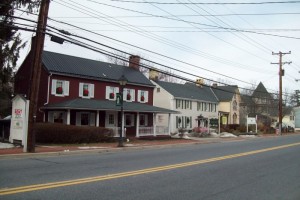 Reisterstown is an unincorporated community and census-designated place in Baltimore County, Maryland, United States. As of the 2010 census, it had a population of 25,968.[1]

Founded by German immigrant John Reister in 1758, it is located to the northwest of Baltimore. Though it is older than the areas surrounding it, it now serves primarily as a residential suburb of Baltimore. The center is designated the Reisterstown Historic District and listed on the National Register of Historic Places in 1979.[2] Also listed are the Montrose Mansion and Chapel and St. Michael's Church.[2]

Just outside the community, to its north, is the small military reservation of Camp Fretterd, which serves as a training site for the Maryland Army National Guard and Air Guard.

There are no user reviews for this listing.
To write a review please register or log in
Register Forgot Password Back to Login